If you’re going to make a comeback to the FIA World Rally Championship after a 17-year long break, it’s best to do it loud and proud. At least that’s what we did when we set out to create a car launch that was designed to be seen and felt by the media.

Toyota Gazoo Racing wanted to organize an event in Helsinki to announce its return to the WRC series. The international automotive media was holding its breath to get a first glimpse of the new WRC car and the new 2017 team. Tapaus was given the chance to organize this once-in-a-rally-lifetime media launch and Finlandia Hall’s Veranda was chosen as the venue to host around 100 automotive media from around the world.

When the media stepped inside the building, they were probably expecting the new car to be there waiting for them under a classic white sheet. But there was no car or sheet in sight. Some of the journalists there were probably wondering if they’d come all the way to Helsinki for nothing. 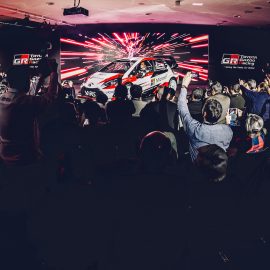 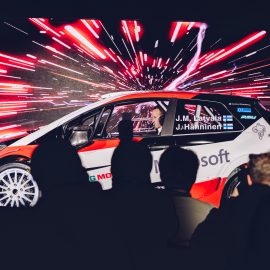 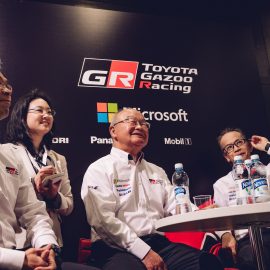 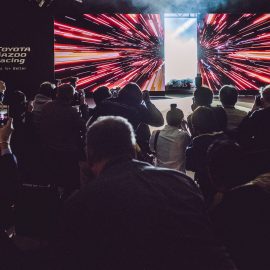 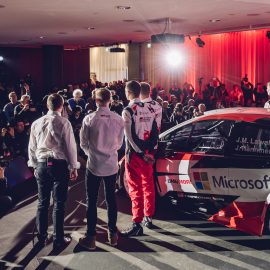 So when the launch was suddenly interrupted by the roar of the turbo motors, it was definitely a turbo-sized surprise. At that exact moment, a LED screen spanning an entire wall split in half and the new drivers drove the long-awaited new Toyota Yaris WRC straight onto a rotating stage. There was a thunderous bang and flashes of lighting. Every journalist there wanted a picture of the new Toyota WRC car, its drivers Jari-Matti Latvala and Juho Hänninen, team principal Tommi Mäkinen, and of course team chairman Akio Toyoda.

The amazing, share-worthy experience the media got was definitely well worth the wait. And while we’re on the topic of ”amazing,” the fact that the Tapaus team was actually able to negotiate driving a car inside Finlandia Hall was nothing short of amazing, too!

The Toyota Gazoo Racing launch got the media attention it was after and news of the launch got a ton of earned media shares.

Want to hear more about this event?