PopSockets presented us with a challenge. The company wanted an exhibition stand that would be like their most popular product, the PopGrip: innovative, colourful, and easily modifiable. The stand was also to be responsibly produced and reusable after the exhibition.

We took up the challenge with enthusiasm and started brainstorming:

“What if the exhibition stand consisted of various components? The stand could be modified through a modular structure, and used responsibly several times at different exhibitions even on a tight schedule. What if the modules were like IKEA boxes – the same size, and you could flatten and pack them tightly for transportation, but put them into use quickly when needed at an exhibition. And it would be nice if the modules were also delightfully colourful and playful!”

During the planning process, our 3D Designer Tuomas sketched his thoughts on paper to kick off the ideas.

A modular exhibition stand was born, following the design language and visuality of the PopSockets brand. The stand toured three different exhibitions in a tight three-week tour: from Düsseldorf to London, and from London to Paris. And the fourth exhibition is just around the corner.

The feather in the cap was the Wall of PopSockets game, devised together with the client, which was hidden inside one of the five wall modules. The game served both as a PopGrip presentation wall and as an activation task for exhibition visitors. In the game, players could drop a ball between the PopGrips in the style of the TV game show The Wall and test their luck. The game was a success, attracting many visitors to stop by and examine PopSockets products in more detail – just as a great exhibition stand should. 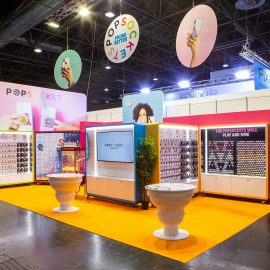 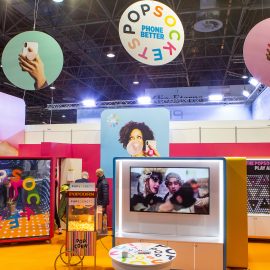 Are you interested in a multi-purpose and responsibly reusable exhibition stand that can be used after the exhibition, for example in a pop-up store or as a product presentation element in your office? Get in touch with our Account Director Jaakko, who will tell you more.